Trade through the Pacific Gateway and Western Trade Corridors helps to create the jobs and growth that support Vancouver, British Columbia, and, Canada’s quality of life. To strengthen and sustain that trade, Canada will need appropriate container terminal capacity. Today, we are at a crossroads and must decide how we build that capacity, where we build it, and who will pay for it.

GCT Global Container Terminals – majority Canadian-owned, largest maritime employer in Canada, with two previous successful expansions behind us – has been trying, without success, to get the VFPA to review our own expansion proposal, the Canadian Deltaport Project, which seeks to add capacity at Roberts Bank by expanding the existing GCT Deltaport terminal footprint incrementally. Our smart, phased approach would deliver an estimated 2 million TEUs of new capacity through the addition of a fourth berth – Deltaport 4 (DP4). We believe that DP4 is a less expensive, less risky to taxpayers, and more environmentally-conscious alternative, yet the VFPA, our regulator and landlord, has refused to even consider it.

A decision that is this important should not be left to the discretion of the officials of the Port Authority. We hope that we can count on your support to ensure that the Canadian Deltaport Project receives an independent, fair and transparent assessment. This is surely not too much to ask, knowing how important the Roberts Bank expansion is to the success of the Pacific Gateway and Western Trade corridors, and, therefore, to the future of the region, the province, and the country. This expansion carries high stakes for the environment, local communities, workers, and Indigenous peoples. Government intervention is essential on this file. 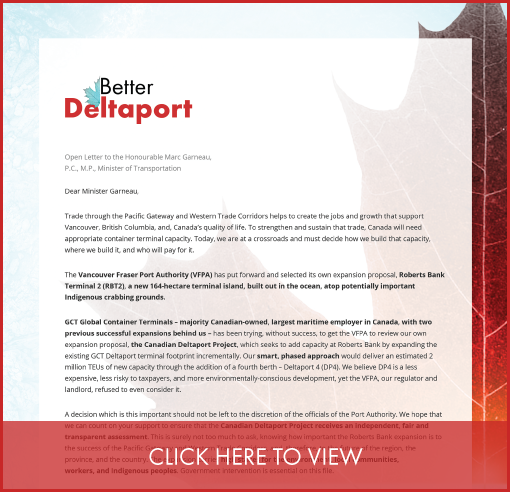